Why do we go to church? 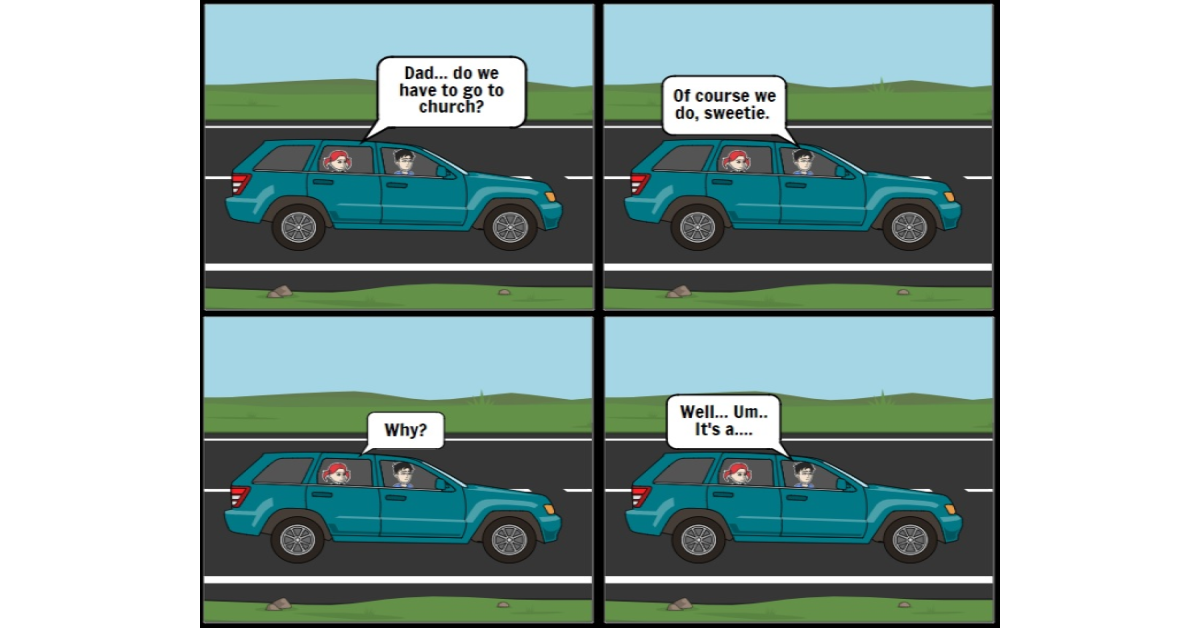 Many people have stopped going to church or refuse to attend services regularly while sharing reasons along the lines of: “Everyone there is a hypocrite and I don’t want to be around those kind of people”, “The church is the people, not the building; so I can worship God even in the middle of a corn field”, and “I can just sing at home and listen to a sermon online so there is no reason for me to go to church”. And the thing is, there is truth in all of these statements. Churches are full of hypocrites, the church is not the building, and it is beneficial to worship God in your own home. Why then do we go to church? And is it really required by God in the Bible or is it a tradition of man that became Biblical doctrine? This is the question to be answered here.

There is only one verse in the entirety of the Bible that absolutely declares that Christians must go to church. Hebrews 10:25a states: Not forsaking the assembling of ourselves together, as the manner of some is. Note that it doesn’t say, “Go to church, period.” This is because, as indicated previously, the church is the people of God, not the building in which the people assemble themselves together. But in modern day vernacular we do refer to this regular gathering together of Christians as “church” and we are command not to “forsake” that. In other words, if the people of God have scheduled a time and place for themselves to gather together, we should make it our top priority to not be absent!

Right about now, my readers may be asking: “But what about the hypocrites?  I don’t want to be around those kinds of people and feel discouraged in my faith by their hypocrisy.” First, allow me to commend your diligence in being picky about whom you spend your time with! Not nearly enough Christians are sufficiently careful when they choose their friends and acquaintances and this leads them into temptations and trials that they could have avoided! To answer the question, the truth is that there are hypocrites everywhere. People naturally put on a front when they are around others as they attempt to not only portray their best selves, but also to show their alignment with the group that they are with in order to receive greater acceptance and improve their own self-actualization. Moreover, both inside and outside of church, you will be surrounded by liars, adulterers, cheaters, murderers, and every other sort of sinful person. So are you really protecting yourself simply by not going to church? When it comes down to it, you cannot realistically avoid being around these people, but you can choose with whom you spend your time!

There will always be that person at church who is the chief gossip but publicly teaches that people of God should hold their tongues and learn to be peaceable. Or that one (ok, several) person who loudly talks about the grace and peace of God on Sunday but is living in sin and openly shares their misery every other day of the week. Avoid these people like the plague! Spending time with them will only bring you down, discourage you, and negate the entire purpose of going to church! But while these people might be the more noticeable and easier to spot, there will also be those in the church who recognize and admit that they are not perfect themselves but they are trying to be. These are the people who are faithful in their walk with God and are striving every day to become closer to him. Focus on these people, make friends with them, and allow them to help you grow in the faith.

Knowing that God has commanded us to go to church, we should simply do it out of love for him and in obedience to him; but we also know that God would not have commanded it for no reason. Thus, there must be some benefit for us as believers to go to church. So what is the reason for us to not forsake the assembling of ourselves together?

Ultimately, it all boils down to one reason. For us to become more worthy vessels for Him. There are several ways that going to church consistently accomplishes this however. First, it fires us up spiritually. Philippians 2:15 teaches that we, as born-again believers, shine as lights in the world, while Matthew 5:14 teaches that we are the light of the world. We are supposed to be guiding others to God as beacons of truth in a world full of lies and darkness. The constant pressure and ugliness of the world makes this difficult however as Satan and his minions wage a constant war to diminish our light as much as possible in any way possible (Eph. 6:12). We are as coals of a fire that flare brightly in the darkness but whose flame goes out quickly unless they are stacked together. When those coals are all pushed together in a pile, they not only burn longer, they burn brighter! This is not merely an analogy. Multiple psychological studies, such as the one published under the title: “Similarity in Relationships as Niche Construction: Choice, Stability, and Influence Within Dyads in a Free Choice Environment” in the Journal of Personality and Social Psychology have found that people have a built-in need to be around and spend time with like-minded people. This means that if you have a Godly mindset, you will always be surrounded by worldly people who do not share your beliefs and ideals. Over time, this constant psychological barrage of not quite fitting in will wear down even the most tenacious and cause them to engage in behaviors that emulate those around them in order to gain greater acceptance. Those behaviors will not align with the beliefs of the individual however; which will cause cognitive dissonance, or the mental distress that is the result of our mental beliefs not aligning with our outward actions. The only way to alleviate this cognitive torture is to either change one’s behavior or to change one’s beliefs. Considering the fact that to revert one’s behaviors back to what they had been previously would be the equivalent of sacrificing the acceptance that had recently been gained, most people choose to instead lie to themselves and find excuses for their behaviors! Naturally, this means that they will now have less alignment with the people of God and will feel uncomfortable and convicted in their presence. This leaves them with only three choices: 1. Admit their wrong-doing, confess, and return to God; 2. Avoid believers and stop going to church in order to stave off the discomfort; or 3. Don the robe of hypocrisy and emulate proper behavior while around believers and sear their conscience with a hot iron to stop feeling it (I Tim 4:2). Never forsaking the assembling together of true believers allows us to avoid this downward spiral into sin and despair! There is a reason why the Psalmist started chapter 122 by saying: “I was glad when they said unto me, Let us go into the house of the Lord” and ended the chapter with: “Because of the house of the Lord our God I will seek thy good”.

Other than this reinvigoration of the spirit, making a habit of going to church even when we don’t feel like it helps us to become more worthy vessels by enabling growth. Christians should be growing in their faith and drawing closer to God every single day. Every one of us should not only be studying the Word of God (II Tim 2:15), but should also be practicing submission of the flesh in order to manifest the fruits of the Spirit (Gal. 5:24). There is a limit to how much one can grow on their own however. A study in isolation is very limited in scope and value. Look at historical Japan whose isolationist policy caused the country to fall significantly behind the rest of the world in technological advancement. Proverbs 27: 17 teaches us that we are all sharpened by each other. Without personal study, we will be lumps of iron ore unfit for sharpening; but without the sharpening of interactions with other believers, we will always be dull tools with great potential but limited value! The two are absolutely reliant on each other and both must happen in order for us to become the vessels that God wants us to be!

Up until this point, only the command to go and the benefits of going have really be discussed as reasons for going to church. But there is another reason why we must not forsake the assembling of ourselves together. And this is because we have a duty to support each other. Galatians 6:1 says, “Brethren, if a man be overtaken in a fault, ye which are spiritual, restore such an one in the spirit of meekness; considering thyself, lest thou also be tempted.” Remember the spiral into sin and coldness towards God that was described under the benefits? We have a command given to us by God to help pull our fellow Christians out of that spiral! The verse says that we are to restore them, but if we don’t know them or their lives how would we even be aware of the fact that they need our help? Granted, there are occasions where we are close enough to our fellow believers that we would recognize their plight even if we weren’t going to church, but even in those unusual circumstances would you be able to restore them successfully when they see that you aren’t even going to church yourself? Highly doubtful!

I Peter 5:8 “Be sober, be vigilant; because your adversary the devil, as a roaring lion, walketh about, seeking whom he may devour:”

Like it or not we are influenced by where or time is spent.
Thank you for adding or duty. I was thinking that as I read why I need church. Giving!

So true. I know at sometime or another I haven forgotten why we go to church because we go every time the door is open. My prayer is that God would allow me to see that someone who needs a hug of encouragement to make it through whatever they are facing. And also when I'm down to reach out, and let God do the embracing through others!!

Amen! Letting others know why, especially our children, is always important.
1 Peter 3:15  "But sanctify the Lord God in your hearts: and be ready always to give an answer to every man that asketh you a reason of the hope that is in you with meekness and fear:"

Malachi 3:16 says, "Then they that feared the Lord spake often one to another: and the Lord hearkened, and heard it, and a book of remembrance was written before Him for them that feared the Lord, and that thought upon His Name." My prayer is that, as the bride of Christ, we would love and enjoy His Presence inside and outside of "church"- we need one another in order to truly and fully glorify Him!

Really enjoyed this article as I have never studied why we go to church. I always knew we were supposed to and knew some of the reasons why but you put it all together very nicely. Also love the way you close with a verse relevant to your closing statement. Another really good thought.

Just found this website, and I think it's excellent! It's rare to find someone who shares the truth so clearly in way that is both straight forward and yet inoffensive. Keep up the good work!