The surprising error in the Bible! 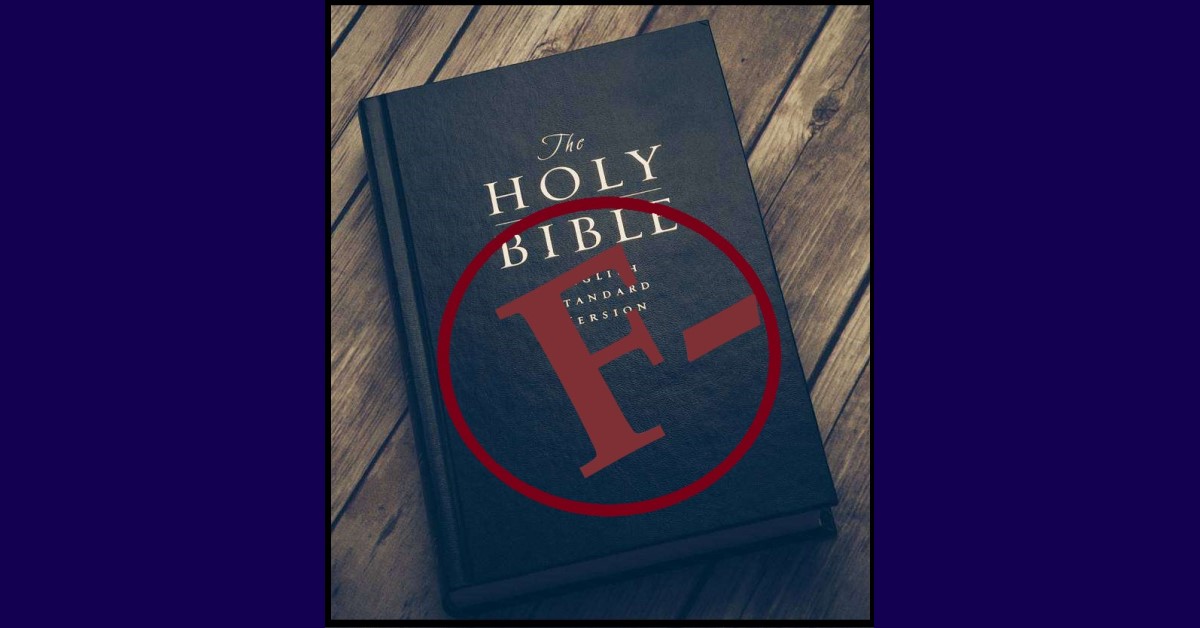 Before getting to the error, there are two things that must be understood. The first, is that Christians cannot and should not operate on blind faith! The second builds on that, and it is that the Bible must be error-free.

When I say blind, I mean baseless or unsupported. Nowhere in the Bible does it teach that we must believe something or have faith that it is true based on nothing else but our own desire that it is so. Unfortunately, this is exactly the argument that many Christians offer in defense of the Word of God! Whenever Christians are presented with a difficult question or have their faith challenged with science (Pseudo science or real), they tend to fall back on such phrases as “Well I have faith that it is true”, or “My faith is my proof!” Giving such a limp-wristed response is not going to convince anyone of the truth of the Gospel and does not align with what the Bible teaches us to do! First, there’s Proverbs 14:15, that states: “The simple believeth every word: but the prudent man looketh well to his going.” We are encouraged here not to simply believe anything but to challenge it for truth. This indicates that we should not have blind faith, but logical faith! We have faith that it’s true not because we want it to be true, but because it has a constant reputation for truth.

1 Peter 3:15 also commands us to: “be ready always to give an answer to every man that asketh you a reason of the hope that is in you”. If we have blind faith, we don’t know why we have this hope and are thus unable to give a reason. In verse 3, Jude exhorts or encourages Christians to “earnestly contend for the faith which was once delivered unto the saints.” If we don’t know why we believe what we believe, we will not be able to contend for the faith and bring others to God through proofs of validity of our faith. In Webster’s 1828 dictionary, faith is defined as “to persuade, to draw towards any thing, to conciliate; to believe”. The dictionary goes on to explain that the origin of the word conveys the sense of drawing something, as with a rope, and binding it. This is an excellent explanation for the word faith, which should be based on the provable in order to bind and make fast the unprovable! This aligns perfectly with Hebrews 11:1, which says that faith is the substance (visible, provable) of things hoped for (invisible, unprovable), the evidence of things not seen. That “evidence” doesn’t mean that blind, baseless faith is evidence for that which is unprovable, but that faith based on proofs provides the evidence for things which cannot be proved in any way!

All of this leads up to second important thing that must be understood. The Word of God must be completely without error or mistake! This is because we can have a solid faith in the unprovable aspects of the Bible, such as the nature of God or what happens after death, only because of the fact that every provable point in the Bible is error free. This track record of correctness is the basis for our faith! If the Bible is not error-free, then our entire faith should be discarded and thrown away. There is a short story that illustrates this perfectly: 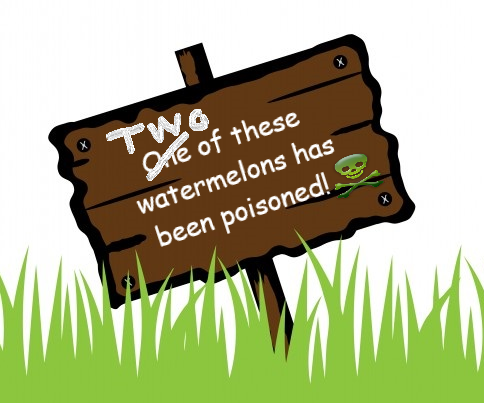 A watermelon farmer lived on the outskirts of town and was famous for always growing the biggest, juiciest watermelons. It happened one night that some boys from the town snuck into his watermelon patch and ate a couple of the watermelons. The next morning, when the farmer came out to check on his field, he noticed that some of his watermelons appeared to be missing. Not only were there fewer watermelons than before, but there were also noticeable tracks of people having been there! The farmer set about fixing the situation to prevent future theft. That night, when the boys arrived, they noticed that a sign had been posted. The sign read: “One of these watermelons has been poisoned.” Immediately, the boys began to argue amongst themselves which one had been poisoned but they were ultimately unable to determine which one it was and thus had to give up eating any of the watermelons. In vindictive anger at having been thwarted, they discussed the best way to get back at the farmer. The next morning, the farmer rose early to check on his field. He saw signs of people having come again in the night, and carefully counted the number of watermelons in the field. They were all there! Chuckling in delight at his success, he turned to start his chores and happened to see the sign. The “one” had been crossed out, and the sign now read, “Two of these watermelons have been poisoned.” In a panic, the farmer began desperately checking his melons to determine the one that had been tampered with but was unable to find any absolute proof. The entire field of watermelons, all of which were perfectly fine other than possibly one or two, was now completely worthless!

Just as the entire field of watermelons had to be called into question and thrown away due to a mere one or two watermelons, so also must the Word of God be discarded if there is error. If there is a provable error in one part of the scriptures, how can we trust the rest of the Bible to be true? We can have faith in the factualness of the unprovable things in God’s word (such as heaven and hell) because of the lack of error in the provable!

This leads to the problem. It seems that there is a great, big, ERROR in the Bible! Genesis 11:11-13 lists the genealogies as: Shem begetting Arphaxad who begat Salah who begat Eber. Luke 3:35-36 however lists the genealogies as: Sem (Shem) begetting Arphaxad who begat Cainan who begat Sala who begat Heber. Some may ask, “So what? It’s just a list of names and genealogies.” But note that Luke has added a person in his genealogies that is noticeably absent from the list in Genesis: Cainan. This is a really big deal! It’s not just an extra name, it is a point that many use to argue that there is an error in the Bible! Remember the watermelons? If there is a single error in the Bible how can we trust any of it?

The common answer provided to explain this discrepancy is that it is a copyist error. The argument is that although the Word of God is undoubtedly “God breathed” (2 Tim. 3:15-17) and that the scripture cannot be broken (John 10:35), that this only applies to the original autographs and that later copies and translations are not protected.  The people who suggest this argument further present as proofs that the version of the Septuagint (Greek translations of the old testament) that were written after the gospel of the Luke contain this extra Cainan while earlier versions of the Septuagint do not.

The problem with his argument is that it does not serve to negate the issue of errors in the Bible. If there is a single error in the Bible, the entire thing must be questioned regardless of the cause of the error. The fact that there may be some errorless text out there somewhere in a language most of the world can’t speak doesn’t mean that we should accept the unprovable things in an error-prone Bible.

This leads to the second argument that is commonly presented. Namely, that Cainan was merely excluded from Genesis. This argument suggests that Salah was actually the grandson of Arphaxad rather than the son. This argument posits that “son of” or “begat” can be used very loosely in Hebrew and that Moses jumped straight to Salah while skipping over Cainan for some reason while other historical documents recorded Cainan as being the father of Salah. This may be possible and would certainly account for the discrepancy between Genesis and Luke as Moses chose to exclude the name for some reason while Luke followed the more absolute listing of genealogies.

Rather than simply being excluded “for some reason” even though he was the son, it seems significantly more likely that he was excluded because he was related but not the son of Arphaxad. For example, if Cainan were the son-in-law of Arphaxad, then he would not be included in the genealogies in accordance with the legalistic Hebrew genealogical traditions. This can be seen through a comparison of the genealogies given in Matthew and Luke. Matthew wrote his gospel specifically to the Jews and followed the Jewish tradition in genealogies of following lineage strictly through the male relative (Laying out the lineage of Joseph even though he was not the father of Jesus). Luke on the other hand, took a looser approach to the genealogies and listed Joseph as being the son of Heli even though Joseph’s father was Jacob and Joseph was merely the son-in-law of Heli. Once again, Joseph was the son-in-law of Heli, yet was listed as being the son. Considering the fact that this is not the norm for Jewish traditions, and that Luke is also the one that included Cainan in his genealogies, it is very likely that Cainan was not the actual birthed-by son of Arphaxad. This would easily explain why he was included in Luke’s genealogies while being excluded from the more stringent Jewish genealogies.

Unfortunately, it is not provable. We cannot go back in time and ask Cainan what his actual relationship to Arphaxad was. But the truth is that we don’t have to. This is a plausible explanation for the difference between Genesis and Luke, and skeptics cannot disprove it anymore than we can prove it. Thus, this “error” that skeptics would love to throw in the faces of believers becomes not a provable mistake that should cause us to question the rest of the Bible, but rather an unprovable aspect of the Bible that can be relied on to be true as the rest of the provable Word of God remains error free. In light of all of this, we can still say with absolute faith and certainty that there is no error or mistake in the Bible and I challenge anyone to prove otherwise.

Acts 18:4 And he reasoned in the synagogue every sabbath, and persuaded the Jews and the Greeks.


I admit that the idea of the Bible having an error rubs me the wrong way. And this is so, as you have so very well stated, because my own faith is based on the Word of God. I would like to avoid these kind of controversies, but it is wiser to be prepared by knowing the Word.
Thanks again for the challenge.

God and His Word are the only truths we can trust in. There is no unrighteousness in Him and therefore His Word is faultless. It would be arrogant to suspect God of error. Rather, it is we humans who have flawed thinking. To know Him is to know He is "the way, the truth, and the life." Praise God for revealing His truths to sinners such as I!

Love the details in your works. You study and reflect on even the seemingly 'less important' genealogies. So many times we(or at least I do) just read over or skip the genealogies not thinking much of it. You have truly put your research in and showed us we should pay attention the God's word as a whole knowing it is errorless. Great points for any arguments or questions anyone might have.

Good article, but it is important to point out to the "weaker brethren" that studying the Bible will bring up some bones just like eating fish, and the more it is studied the fewer bones one will find.