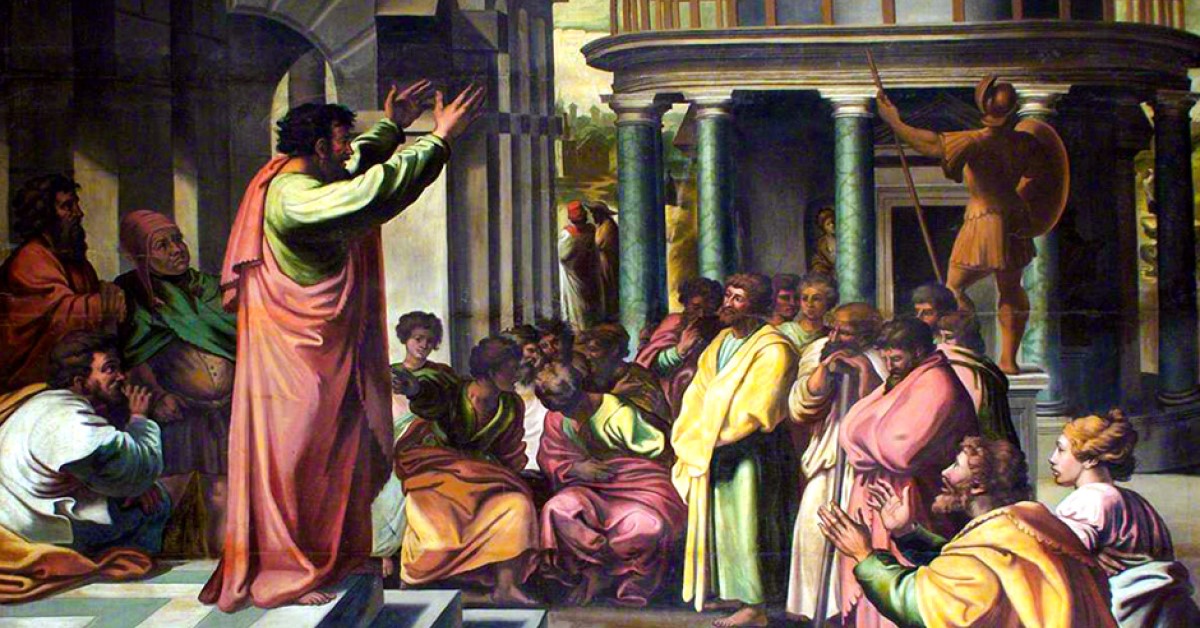 Note: This article is the fifth lesson in a series of apologetics-related articles that are a condensed version of an apologetics class that I taught. You can read the first one here.

Although apologetics is often referred to as the defense of the faith, apologetics should actually be used both defensively and offensively. Now when I say offensively, I do not mean that it should be used to give offense and I do not mean that it should be wielded like a baton to bash people over the head. Instead, apologetics should be used to present the Gospel of Jesus Christ persuasively in a manner that will increase its acceptance. This is exactly what we see Paul doing in Acts 17:22-34; and if we examine his message, we can find several principles that we should utilize in our own evangelistic efforts.

The first step to sharing the Gospel with others from an apologetics standpoint would be to start where you both agree. We can see Paul doing this in verse 23, then again in verse 28. Whether the person believes that Jesus was the Son of God, actually existed, or even just that there is a God; you can almost always find some viewpoint or belief that you can both agree on. By identifying that common ground between the two of you and starting to share the truth from there, you will align yourself with the other person and set off on a shared quest to find the truth rather than facing off against each other as opponents. This will go a long way towards setting a more congenial, receptive mood rather than aggressive or stubborn.

Focus on sharing the truth rather than disproving the false

Unfortunately, even when a common ground has been found, that common ground is almost always surrounded by incorrect beliefs and assumptions. For example, if the person believes that Jesus was a real person who lived during Bible times, they may still refuse to acknowledge His deity or authority. And that’s all right! We should not expect them to completely know, much less believe, the entire truth! If they did know and believe, they would already be saved after all. So it is our duty to share that truth, and that is exactly where our focus should be. If the person that you are talking to believes that Jesus was simply a good teacher, but not God; it is very easy to use logic to completely disprove them. After all, either Jesus was telling the truth, which would make Him God, or He was lying, which would make Him a bad teacher. But disproving their beliefs has little to no value. Looking again at Acts 17, we can see that Paul didn’t waste time disproving Zeus or the other Greek gods. He could have argued that there isn’t an unknown God because if that God were a real God then He would make Himself known to people; but what would have been the point? Instead, he ignored the falsity of their beliefs, looked past the misunderstandings of logic, and cut straight to sharing the truth of the Word of God.

There are several benefits from focusing on sharing the truth instead of disproving the false. First of all, truth from the Bible carries a power all of its own. Hebrews 4:12 says that the Word of God is quick and powerful. The truth of the Gospel will always be superior to any logically worded argument.

Another benefit is that you are allowing them to come by themselves to the conclusion that their cherished beliefs are false. This is very important! I’ve mentioned it before in some of my previous apologetics articles, but people hate to be told that they are wrong. Because of this, people will often refuse to acknowledge that they are wrong out of sheer stubbornness even when they realize it. In fact, they can even fool themselves into believing that they weren’t actually wrong even when they know deep down that it isn’t true.

Finally, but sharing the truth and ignoring the false beliefs, their focus will also be set on disproving the truth rather than proving a lie. What I mean by this, is that if the person disagrees with you or is unwilling to believe, they will go home and research arguments, evidences, or whatever else to disprove what you’ve been saying. This may sound really bad, but it is actually much better than the alternative of them going home and researching evidence of their own beliefs.

It’s ok if they don’t believe the premise

A premise is simply a statement or proposition from which another is inferred or follows as a conclusion. For example, if I say “All mermaids have tails. Therefore, Ariel has a tail.” The sentence: “All mermaids have tails” is the premise of my argument. It is the statement that I am going to make and base the rest of my argument on. In Acts 17, we see that Paul’s premise is that the God of the Bible is the unknown God of the Athenians. Did the Athenians all agree with him or believe that his premise was true? Of course not. We see in verse 32 that many of the people there ended up rejecting him and his message. But it’s ok if the person that you are talking to doesn’t believe your premise. Move on and share the rest of the Gospel. Remember that faith comes from hearing the Word of God (Romans 10:17).

What to do when there is no common ground?

Before anything else, identify any presuppositions that the individual may be harboring, and force them to recognize those presuppositions. A presupposition is something that a person supposes or takes for granted beforehand. They do not have any proof or reason for believing it, and simply believe it off-hand. Presuppositions are dangerous because they allow a person to completely ignore all evidence to the contrary and disregard it completely. For example, a person who presupposes that there is no God would never be persuaded that there is a God. If there were a video of God creating the world, they would dismiss it as computer graphics. If there were thousands of eye-witnesses to God Himself having come down to declare His existence a reality, they would declare it to be mass hysteria or mass hypnosis. Even if God personally revealed Himself to them, they would think that they were having a hallucination. No amount or type of proof would be enough to convince them! Before anything else then, you must get them to acknowledge their presupposition and ask them to adopt a more open state of mind that is receptive to having its beliefs challenged.

Sometimes, it’s best to skip trying to persuade someone to believe something and jump straight to sharing the truth through hypotheticals. Do you remember the earlier point about them not believing the premise? Well, that still holds true and talking hypothetically can be a great segue (transition) to sharing the truth. It’s perfectly acceptable to say: “Let’s assume for a moment that there is a God…” then move on to the logical conclusions that would naturally follow if that premise is true. Once again, this is because the truth of the Gospel can resonate with the heart and soul of a person and God can use that truth to draw them to Him. Acts 2:37 says: “Now when they heard this, they were pricked in their heart, and said unto Peter and to the rest of the apostles, Men and brethren, what shall we do?” This verse says that when the people heard the Gospel, their hearts were pricked. The Word of God has not lost any of its power in the millennia that have passed since that verse!

As Christians, we have a duty and responsibility to share the Gospel with others. Apologetics is an excellent method of fulfilling this duty and one that was certainly favored by the apostle Paul. Through a study of his message to the Athenians, we can find several points to follow that will assist us in using apologetics effectively; but it is all worthless is we don’t actually put it into practice! It doesn’t matter how well versed a person may be in the Bible or how well he/she can present the Gospel if they never actually talk to another person about the Bible and the truth that it contains. I will be the first to admit that it can be daunting to talk to others about the Scriptures. There may be feelings of inadequacy, embarrassment, shyness, or some other such undesirable emotion when thinking about talking to a friend, coworker, or stranger about the plan of salvation. Just remember that God will give you the strength that you need to do so and the Holy Spirit will help bring the right words to mind.

2 Corinthians 12:9 And he said unto me, My grace is sufficient for thee: for my strength is made perfect in weakness. Most gladly therefore will I rather glory in my infirmities, that the power of Christ may rest upon me.

For those who want to learn more about apologetics and are looking for additional resources, I highly recommend Dave Hunt’s book “In defense of the faith”. Unfortunately, not all of the verses referenced in the book are from the KJV, but the majority of them are. Like all things written without the divine inspiration of God, I recommend testing everything said against the truth of the Bible! It is an excellent resource however and he answers many questions about the faith using apologetics. You can find it at Amazon here: In defense of the faith

No comments here yet :(