How many levels are in hell? 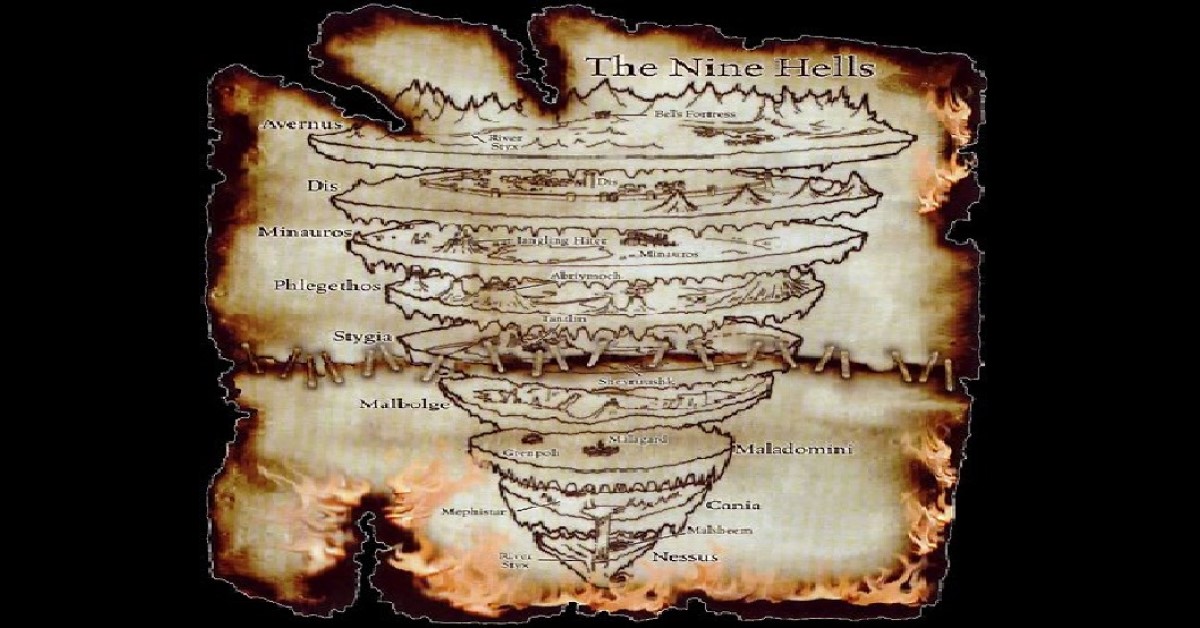 The idea of hell having multiple levels seems to originally have come from Dante’s poem called “The divine comedy”. It is also often referred to as “Inferno” which is the name of the first of three sections of the divine comedy. In this work of fiction, Dante describes hell has being comprised of 9 different circles. Two circles for virtuous pagans and misguided heretics, and 7 circles for the 7 cardinal sins of Catholicism. Not only is this purely a work of fiction (thus not inspired by God), but it also doesn’t align with what the Bible teaches.

No where in the Bible does it imply that Hell is broken up into different segments or is comprised of multiple areas. The closest that the Bible comes to suggesting that there may be any kind of segment in hell is that there used to be a divide between hell and paradise. Before Christ died on the cross, the saved souls of the world did not go immediately to heaven. This is because souls can go to heaven only through the redeeming blood of Jesus Christ, and that blood had not yet been shed. Instead, the saints of the old testament went to a paradise that Jesus calls “Abraham’s bosom”. Similarly to hell, this paradise is referred to as being in the “heart of the earth” (Matthew 12:40) and in the true story about Lazarus, Jesus says that those in paradise and in hell can see each other but cannot cross over to each other due to a “great gulf” (Luke 16:26). Note earlier that is says, “Used to be a divide”. This is because when Jesus died on the cross, he descended down into the earth, led captivity captive, and opened the way to heaven (Ephesians 4:8-10). Is that paradise still sitting down there, now vacant, as a constant reminder about what those in hell could have had but don’t? Possibly. The Bible doesn’t actually say what happened there after Christ died and resurrected. It does say, in Isaiah 5:14 that hell hath enlarged herself. It is entirely possible (but not provable) therefor that hell expanded to consume the place previously reserved for the pre-death of Christ saints. Regardless, even this would not provide any indication of hell consisting of multiple sections, levels, or rings.

Some have suggested that the lake of fire is actually the heart of hell since that is where the devil will eventually be thrown. There is absolutely nothing in the Bible to even remotely suggest that! In fact, the Bible very clearly teaches that the lake of fire and hell are two completely separate things. First, the word for “hell” that is used in the Bible is also the word for “grave”, and it is clearly understood that no one has every gone to hell alive. Even Jesus died before going down to paradise. In Revelation 19:20 however, both the beast and the false prophet were cast alive into the lake of fire. Moreover, in Revelation 20:14, it says that hell itself is cast into the lake of fire. If the lake of fire is the very center of hell, then how could hell be cast into itself? Finally, there are several times throughout the Bible where references are made to hell being in the earth. Yet in Revelation 21:1, it says that there will be a new heaven and a new earth because the old heaven and earth were passed away. The lake of fire is referred to as being an eternal punishment for Satan, the beast, his prophet, and lost souls. Hell, however, cannot be eternal if it is tied to the earth and the earth will pass away. Thus, while there is no Biblical proof for the suggestion that the lake of fire is the center of hell, there is a lot of proof that hell and the lake of fire are different places just as paradise (Abraham’s bosom) and heaven are different places.

While the Bible does not teach that there are multiple levels in hell, it does suggest that there are different degrees of punishment in hell. Revelation 20:11-15 states that people will be judged according to their works. What would be the point of judging each not only by the book of life (meaning saved or not) but also by their works if the punishments would all be the same? Moreover, in Luke 10, Jesus says that it will be more bearable for Tyre and Sidon at the judgement than for the Galilean towns that were refusing Christ. This provides further indication that some punishments will be more severe than others. Finally, in Luke 12, verses 47 and 48, Jesus teaches that is fair and just to mete out more and less severe punishments based not only the severity of the crime committed but also how knowledgeable one is about right and wrong. God is always fair and just, so it makes sense that He would also mete out punishments in proportion to the severity of one’s wrongdoing.

There are some who disagree with this conclusion due to the widely-held belief that all sins are equal and absolutely the same in the eyes of God. This is both true and not true. The idea that all sins are equal comes from James 2:10, which states: “For whosoever shall keep the whole law, and yet offend in one point, he is guilty of all.” So if I lie, I’m also guilty of murder, right? Not quite. Clarification can be seen in the very next verse, which states: “For He that said, Do not commit adultery, said also, Do not kill. Now if thou commit no adultery, yet if thou kill, thou art become a transgressor of the law.” It doesn’t say that if you kill someone that you are also an adulterer, it says that you are a transgressor of the law. In other words, verse 10 is saying that if you offend in one point, that you are guilty of the entire law. What this means is that all sins are equally damning in the eyes of God and that we deserve to go to hell for even the smallest, tiniest sin. That doesn’t mean that all sins are equally heinous or that they all deserve the same punishment. To suggest that would contradict with the multiple passages that were pointed to in the previous paragraph, and the Bible will never contradict itself!

Although there may be some in hell who are experiencing a bit less torment than others, even the lightest torment in hell is worse than anything possibly imaginable here on earth. Hell has become a bit of a laughing matter in modern media, but the reality is that it is anything but that. Hell is a real place, and anyone who has not accepted Christ as their savior will go there. Don’t let that be you.

Matthew 13:50 “And shall cast them into the furnace of fire: there shall be wailing and gnashing of teeth.”

I see that you have had some good Bible-based training. Your arguments for your position are based on the Bible rather than some extant material from "so-called church fathers."

Keep up the good work. Just found your site today after reading the missionary letter from your Dad. Wish your parents well too! May God bless! Rev 4:11 / Don

I am thankful to the Lord for your in-depth Bible study and clear Bible-based
teaching addressing the subject of Hell, which Jesus Christ Himself warned against throughout His earthly ministry.

Great facts and Biblical teaching to clear up other false doctrines. You make sure to back up your facts with the Bible. A suggestion as a young adult with not as an advanced vocabulary as others, perhaps including a dictionary on the site for not only the less known English language terms, but you could also include Bible terms with different translations such as Hebrew. Just a thought of which you can do with what you want. Great article overall.